If early adoption is any sign of what the future holds, blockchain technology can revolutionize stock market trading around the world.

Blockchain technology has already significantly changed the future of money, finance, supply chain management, record keeping, and more. Not only does blockchain technology support crypto-currencies such as bitcoin and ethereum, but it has the potential to revolutionize both stock trading marketplaces and the way financial data is stored and transmitted around the globe.

While blockchain technology is still nascent within stock market trading, indications from stock markets around the world are that it could impact stock trading as much, if not more than, it has already affected currencies.

Nasdaq, the New York Stock Exchange, the Tokyo Stock Exchange, the Deutsche Bourse, and India’s Securities Exchange Board, among others, have already either started to use blockchain technology for some of their transactions, or have appointed commissions to study the feasibility of using blockchain in the future.

How blockchain technology can be used within stock markets

Perhaps the most beneficial way blockchain technology can be used in stock trading is by speeding up the settlement of trades. Stock market traders, brokers, and regulators are required to go through a cumbersome, and expensive, process which typically takes three days or more to complete transactions— mainly due to the role of intermediaries, operational trade clearance, and regulatory processes. Blockchain technology could make stock exchanges much more efficient through automation and decentralization.

But it’s not just the settlement of stock trades  which  could be affected. Blockchain technology can also help with fundraising and asset management, as well as margin financing, post-trade settlements, tracking securities lending, and monitoring systemic risk. Ultimately, it can also help reduce costs levied on customers, and in some cases it could completely eliminate the need for a middleman.

“The core functions of ‘financial services’ — verifying and transferring financial information and assets — very closely align with blockchain’s core transformative impact,” according to McKinsey & Co. in a June 2018 report titled Blockchain beyond the hype: What is the strategic value. “Major current pain points, particularly in cross-border payments and trade finance, can be solved by blockchain-based solutions, which reduce the number of necessary intermediaries and are geographically agnostic.”

Additionally, the savings could be meaningful. “IT and operations expenditure in capital markets is currently close to $100-150 billion per year among banks,” according to the report Blockchain in Capital Markets by Oliver Wyman. “On top of that, post-trade and securities servicing fees are in the region of $100 billion.”

It comes as no surprise that Nasdaq was one of the first exchanges to adopt bitcoin technology. The New York-based firm operates at the intersection between finance and technology, enabling investors to securely navigate financial markets on a global scale and harness the power of blockchain technology.

Most investors are familiar with the Nasdaq market for traditional investing, but Nasdaq has also become an industry leader in developing innovative securities transaction methodologies since 2013. It was one of the first to explore and incorporate the use of blockchain technology into its applications. In 2015, Nasdaq announced its first private securities transactions using blockchain technology. Chain.com was the first client to use Nasdaq’s own Linq Blockchain ledger platform. 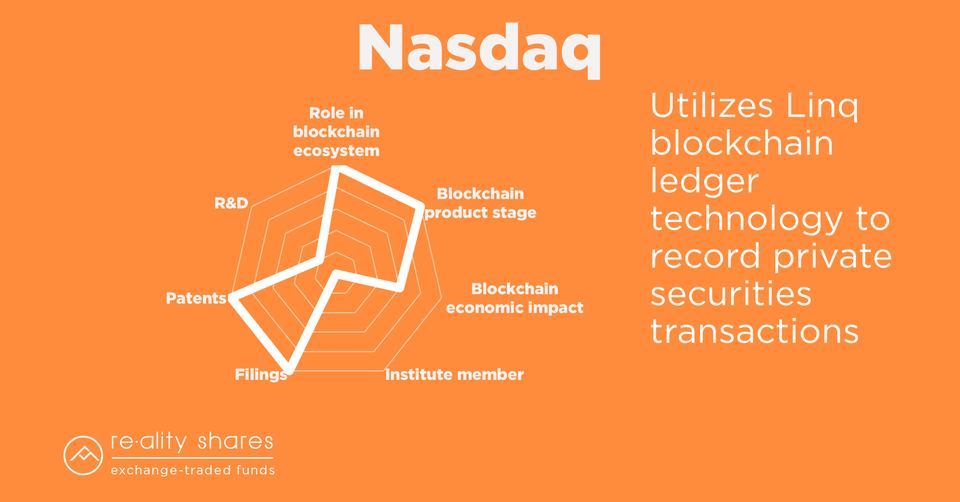 For stock markets, however, not everything about blockchain has been positive. The new technology also gives rise to legal and regulatory challenges, which governments, regulators and the financial industry itself will have to overcome. The implementation of blockchain could also bring risks of scalability and maintaining security standards. An example, China’s Shenzhen Exchange has had to crack down on companies that are misleading investors by associating themselves with “blockchain technology” even though the companies had little or nothing to do with blockchain.

While China has not allowed crypto-currencies to date, it has embraced blockchain technology. In fact, not only have Chinese companies taken the lead on blockchain innovation, China Central Television hosted a show on June 3, 2018 about blockchain technology in which they proclaimed that it is “10 times more valuable than the Internet.”

Despite the growing pains that are inevitable with any new technology such as blockchain, it’s reasonable to expect that blockchain technology could follow  a similar growth path  to the internet itself  from the 1990’s until today. Indeed, only the strong survive, and some industry experts are already drawing the comparison that blockchain technologies could be the next killer technology. Here at Reality Shares I believe Blockchain technology has the ability to revolutionize companies, governments and even society for the better, and offers great investment opportunities for investors who can identify the right companies.

previous Where's The Beef? Wyoming Ranchers Bet On Blockchain To Track It
next Blockchain for Good: How New Technology Is Helping Those in Need in Novel Ways